Week 3 - How to sneak your dog onto spanish public transport!

23rd - What a terrible nights sleep, the thunder and lightning didn’t stop until 7am. Luckily, Jades handy work passed the test and we had no leaks (besides leaving the roof vent open a little!)

It was time to set off for an hours drive to our next location. We planned to go for a bike ride so we stopped at the local Decathlon to pick one up a new bike for Jade. What a surprise, the only place they had one in stock was back where we just came from. So an hours drive back towards Tarragona to get the bike and then back to Tortosa. After all that, we were too tired so we parked up and planned our route for tomorrow. We’ll see if Jade can keep up with the Tri-Ride!

As we arrived at the park up for the night, we needed to fill up with fresh water. Jade decided she could do this on her own. Hold a pipe in the water tank and press the water button a few meters away at the same time. What could go wrong? As she pressed the water button, the pipe fell out the water tank spraying all the electrics, batteries, new electric bike, Tri-Ride and Smartdrive in the back of the van. As I came out to help, I pressed the button to stow the under van lift away, I forgot to open the side door fully. As the lift began began to slide under the van, it took part of vans sliding door with it, making a nice dent in the door.

A long frustrating day made slightly better by a breakfast bowl of chocolate pillows cereal for dinner. This is vanlife some days and don’t worry all the electrics etc was fine!

24th - We woke up to a beautifully sunny Tortosa. With a fully charged electric bike and Tri-Ride to play with, we found a nice long cycle path on a Vias Verdes close to the town. With Bobbi on my lap and Arla on a long lead so she can run next to Jade on the bike. An empty cycle path that ran for miles with views of the mountains in the distance. We let Arla off the lead so she could run freely next to us and then we braved it with Bobbi. This could have gone terribly wrong but turned out Bobs loves to run alongside us whilst riding. 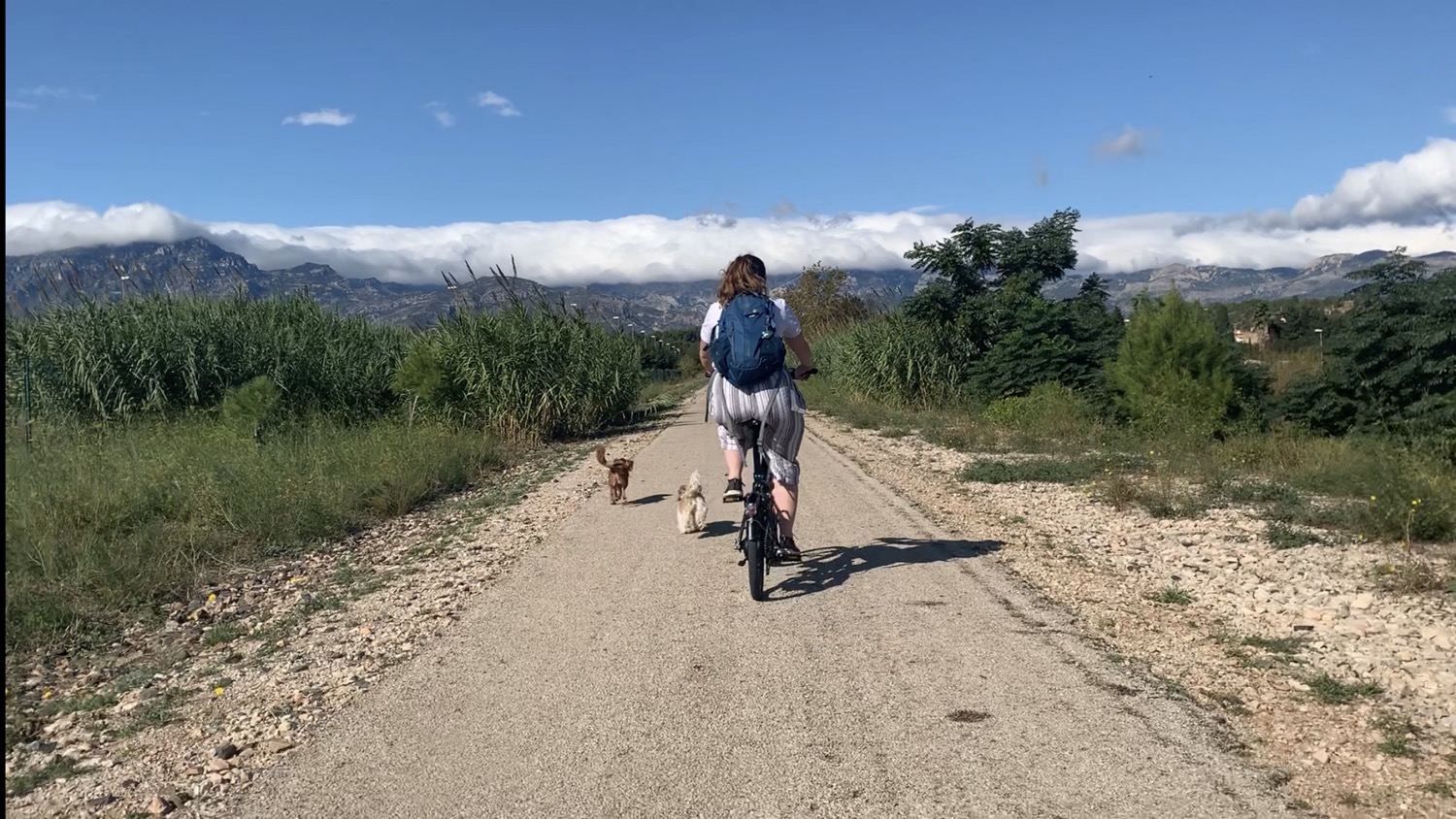 With both of them knackered, Bobs was back on my lap for the ride home and Arla in Jades rucksack.

We stopped at Decathlon on the way to see if we could find a basket for her to sit in instead but they we’re all out of stock!

A nice early evening gave us a chance to plan the next few weeks ahead. Turns out there’s too much to see and not enough days to fit it all in!

25th - One of these days I’ll write we got up nice and early to get to where we’re going but not today. Why rush, we’re on holiday and have the freedom to go wherever we want, whenever we want. That’s the beauty of a home on wheels.

We headed off towards our next spot and drove through and around the beautiful Parc Natural Dels Ports, what an amazing landscape. You really do forget you are in Spain. We would highly recommend anyone checking it out! It was 25 degrees and not a cloud in the sky.

We found another Vias Verdes bike trail and with the dogs on board, wind flowing through their faces, tongues hanging out, we took a shortcut to get to the main cycle path. To get there we had to cross a big puddle of muddy water and with no idea how deep it was and if the Tri-Ride would make it through and thankfully it did, I just had to go for it! It felt like I could fall in at any moment.

Not another person in site, vineyards either side, mountains in the background, it really was a lovely day. Although we never did make it to the actual bike path! It was a little bit too “off-road” for a wheelchair!

So we headed back to our park up for the evening to find the van had been taken over by a gang of flies! Slowly picking them off 1 by 1, but they just kept appearing from somewhere!

26th - This morning we headed to the small town of Bot. A beautiful drive along some very windy roads with steep drops either side. It’s not always fun when you meet a lorry coming the other way but luckily that doesn’t happen too often out here because most of the time it feels like we’re the only ones on the road!

We found the Vias Verdes which I just realised I haven’t explained! The Vias Verdes or “Green ways” are old railway tracks converted to paths that run for miles, accessible to walkers, cyclists and wheelchair users. There are many dotted around Spain and this one was particularly beautiful. It was also completely flat, meaning we could both pick up some speed and ended up riding for 15km.

We cycled through the mountains with views of the hot springs and rivers running beside us. Along the route we’re several tunnels through the mountainous landscape. Some of the tunnels had small lights mounted so you could just about see your way. Two tunnels had no lights, so at times was a bit scary and it felt like you were in a horror movie. Luckily, Jades bike was fitted with a light to guide the way but running on a battery which could go out at any minute. The longest tunnel was over 790 meters. 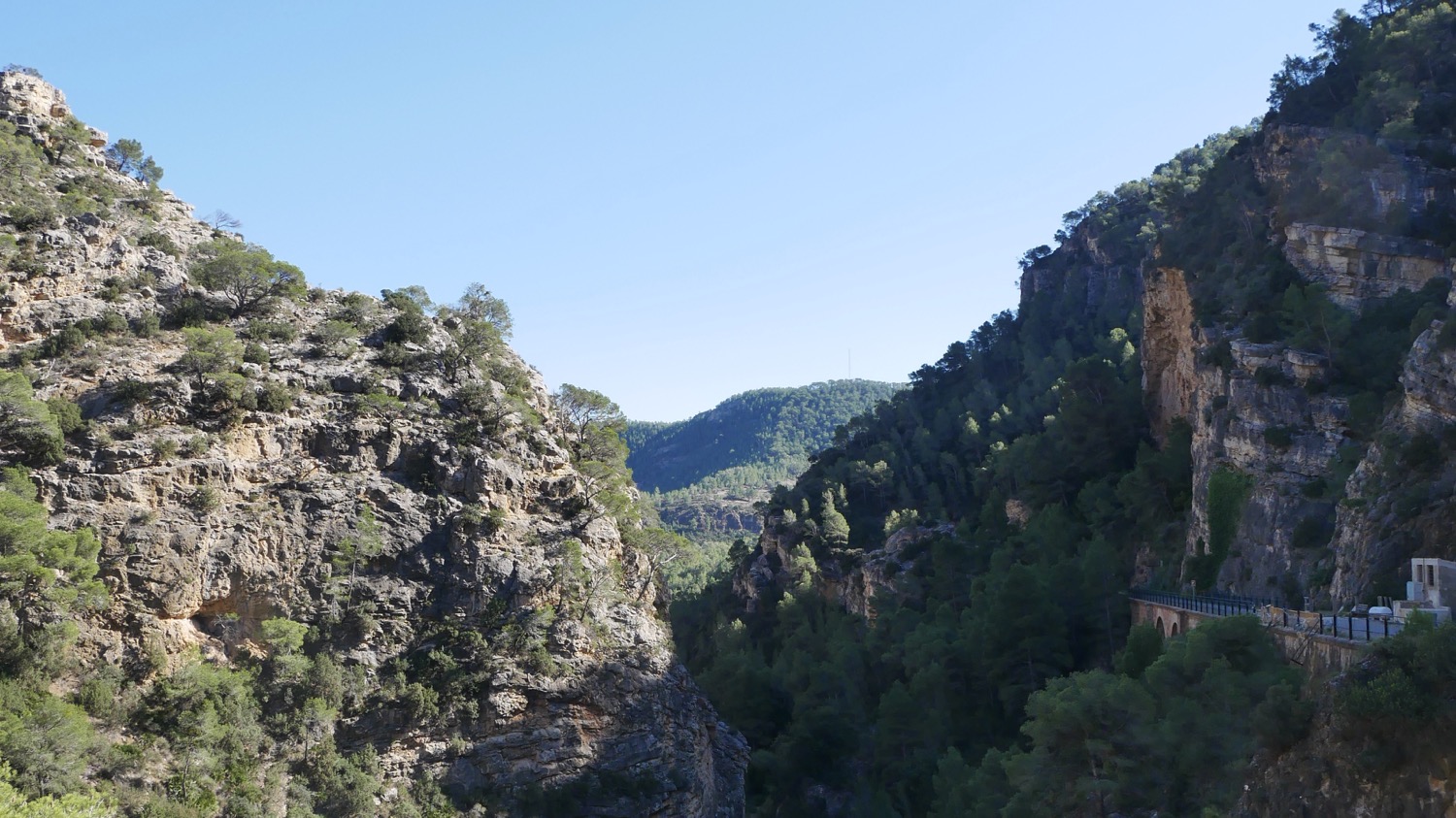 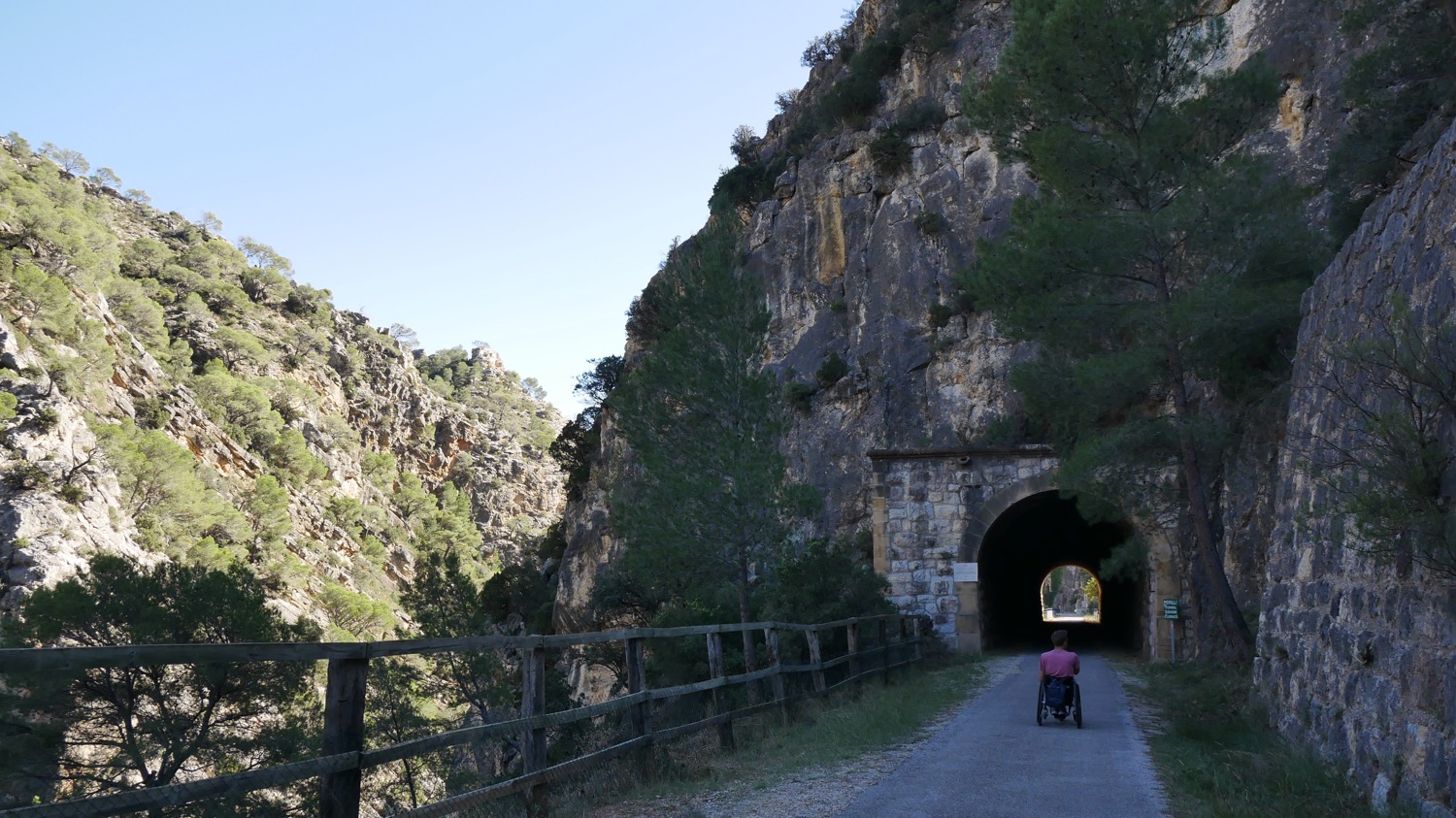 The dogs loved it, running either side, loving life. But they weren’t too keen on the tunnels either, Bobs jumping straight back onto my lap and Arla back into her little basket on the front of Jades bike whenever we came to one. 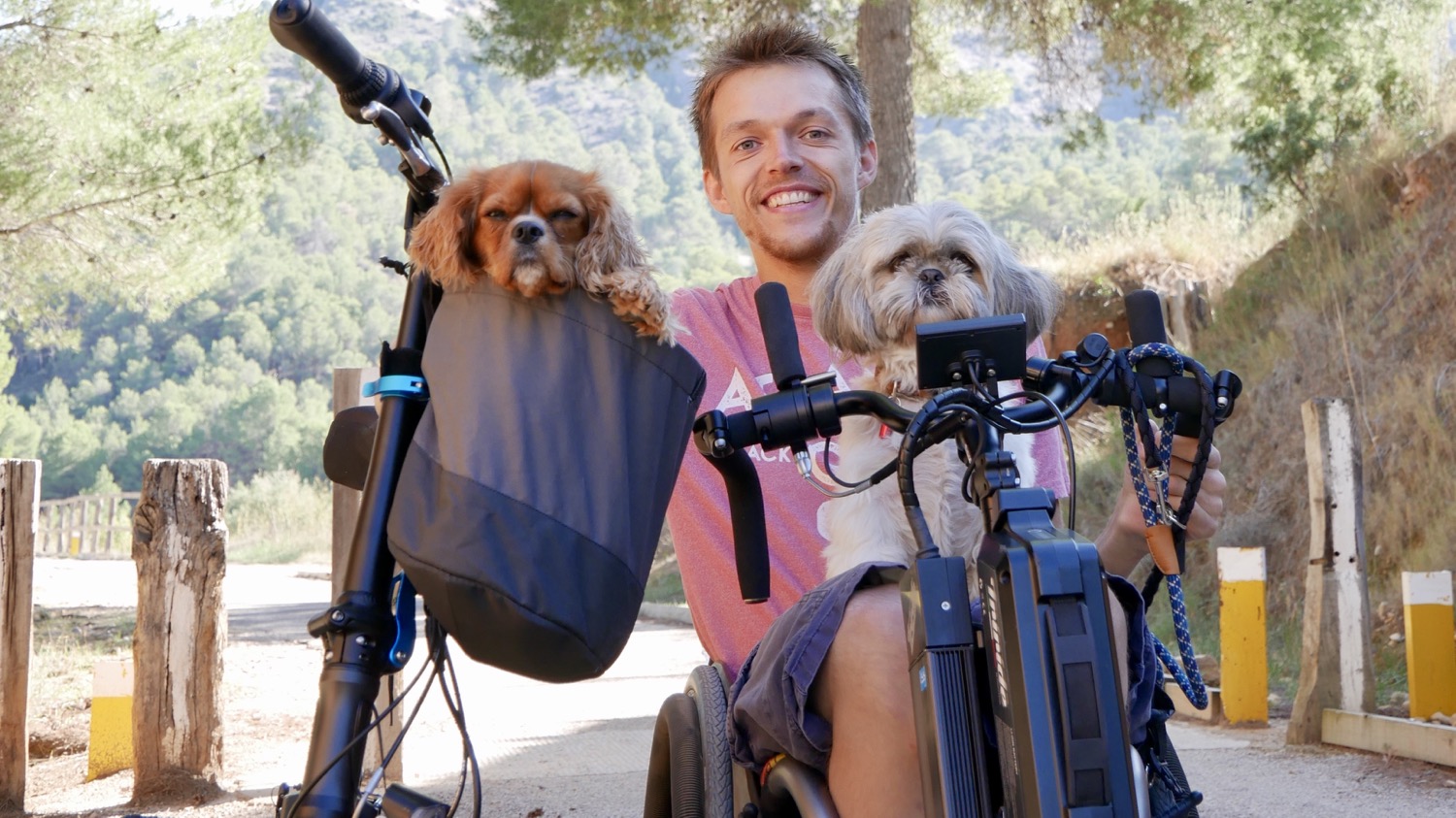 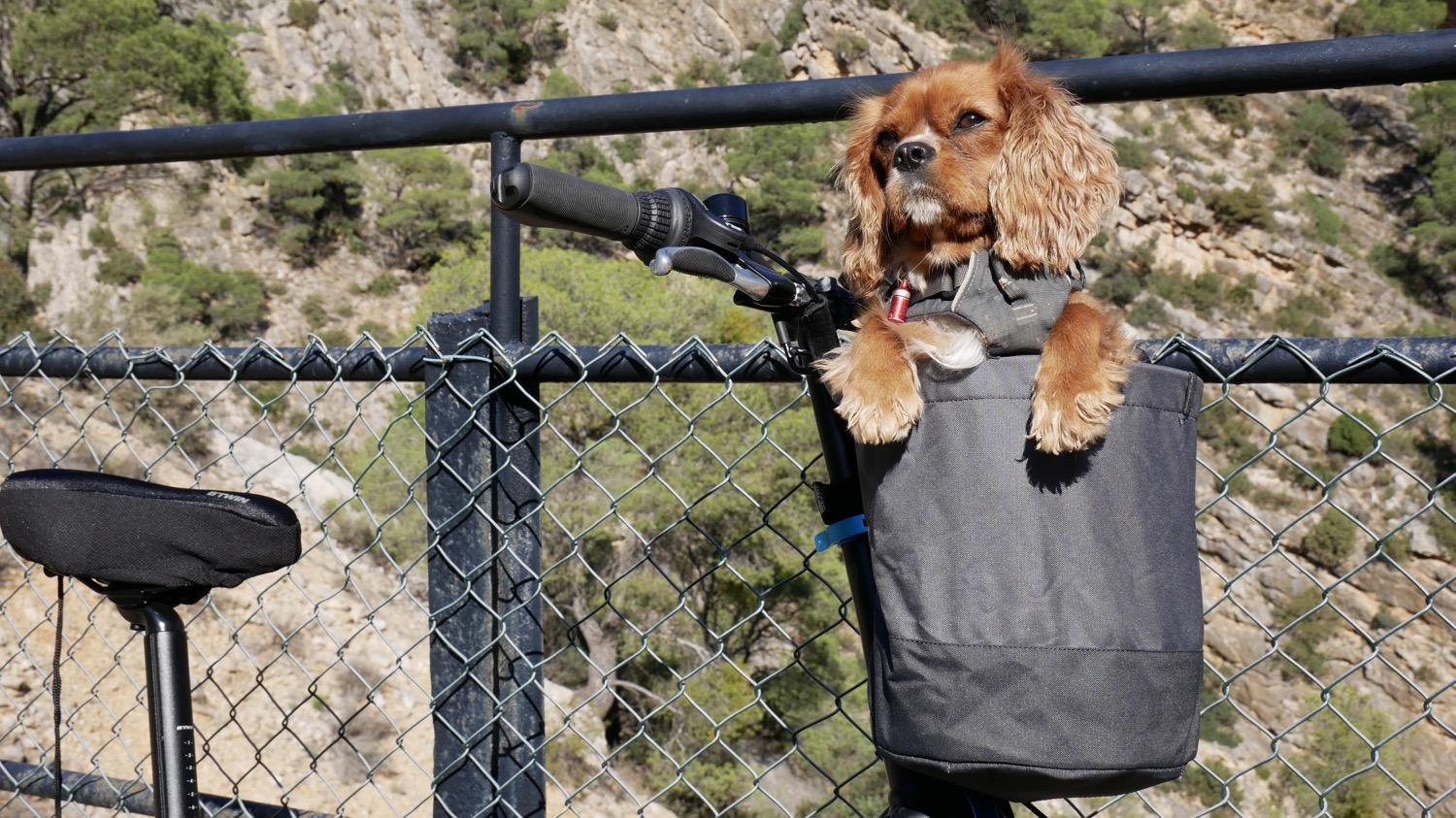 Once we got back to the van with two very tired doggos, we started the beautiful drive to our park up for the night along the N420 (which if you are in the area you should definitely detour too!). The views of mountains went on for miles and still amazes us that this is in Spain. When you think of Spain you immediately think of the big cities and beach towns that Spain is more commonly known for, but we have fallen in love with the Spanish mountains! We drove to the town of Morella and parked up just outside at a spot overlooking the whole town. We were lucky to arrive on Saturday as they light up the town on Friday and Saturday nights.

27th - After a really chilly night in the van we woke up to beautiful blue skies and a view of the hill top town Morella.

The town of Morella is known for the iconic Castillo de Morella that towers above the city on a massive rock. The castle has been used as several things throughout history such as a prison. It’s gothic architecture and medieval city walls are other highlights of both the castle and town. As we wondered through the cobbled streets we felt welcome and could feel the buzz of the lively Sunday markets, which are a popular event during the week. We also got our first taste of churros from the market, a popular past time Jade used to do with her family when they lived in Spain.

The town was not an easy place to get around but we managed fine with the tri-ride attachment.

The drive from Morella to Benicássim was a memorable one. Travelling through the mountains of El Maestrat, hairpin turn after hairpin turn with drops either side of the road was good fun for me driving, Jade was having a little panic attack in the passenger seat.

We arrived in Benicássim and pulled up to our park up which was packed with motor homes, like sardines in a can! Definitely the most we’ve seen at a spot so far. We made our own little space and set up for the evening.

28th - Arla decided to wake us up at 2am with projectile vomit everywhere! Not exactly the nicest way to be woken up. Especially for Jade who had to clean it all up! We’ve just ticked over 1000 miles since we arrived in Spain and we’re just outside Valencia although it feels like we’ve been here for a lot longer than three weeks.

We drove to a park up on the beach front in the town of Puçol. When we arrived the town was completely deserted and felt like we we’re driving through a map from the game Call of Duty. A very quick u-turn and half an hour down the road we arrived at Valencia Camper Parks. Right next to a tram station that’ll take us into the centre of Valencia. Which makes it much easier than driving round trying to find a safe place to park the van. Now just to find a way to sneak the dogs onto the tram! A lazy evening, ready for 2 long days exploring the city.

29th - After we had showered, dressed and fed we decided to try to venture into the city of Valencia by tram. It was a 25 minute ride in and both Bobbi and Arla had to be in carry on bags.

We read that they’re very strict on travelling with dogs in Valencia and are not really a dog friendly place. We did kind of get that vibe on the tram. No one wanted to sit near us and as the tram got more and more busy there were quite a few disapproving people staring. But the dogs didn’t care and neither did we.

We got off and headed straight to the centre. No idea where we were going, just wondering down the small Spanish streets. We visited the Central Market of Valencia and ended up eating lots of ice cream and bowls of patatas fritas.

It was 24 degrees and just too hot for the dogs, so back on the disapproving tram and back to the campsite.

They have a chef who comes in to cook they’re famous Paella twice a week. So tonight was the first time I tried it. I say tried it, I just ate the rice. Not a fan of prawns with heads on and mussels on my dinner plate! Or any fish for that matter, unless it’s from the fish and chip shop, covered in batter!

It‘s been a great week exploring this part of the coast. Next week we’re heading a bit more in land, who knows where we’ll end up.

Week 5 and 6 - Moving into the slow lane

Week 4 - A trip down memory lane

Week 2: We finally made it to the coast!